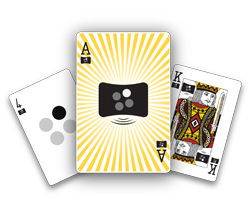 Emphasize One or More. Incorporate All.

Concerto allows one type of message to be highlighted amongst a huge pool of different messages. Concerto messages are organized into categories called feeds, which can be mixed and matched differently on each separate Concerto display to cater to distinct locations and audiences. 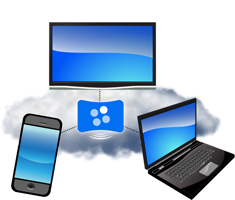 Make it Memorable. Put it Everywhere.

Because Concerto lives on the World Wide Web, any device that can be connected to the Internet can potentially display Concerto. That means that flat panel televisions, mobile phones, personal screensavers, and other websites can all serve as hosts for your exciting announcements.

Concerto is the perfect model for grassroots communication. The software is fully open source, so you can use and deploy it for free. Because of the affordable hardware prices and Concerto’s flexible architecture, many different organizations (with different budgets) can help grow your Concerto network.

Concerto started at a well-known, private technological university in the United States. While this certainly isn’t the only place where Concerto can be implemented to great effect, it’s easy to realize the benefits of a Concerto network by peering into life Rensselaer Polytechnic Institute (RPI) with Concerto.

Case in Point: The RPI Story

Concerto launched at Rensselaer Polytechnic Institute in March 2008. A group of plucky students saw the opportunity to bring the open source Concerto software to their school, and made a proposal that was endorsed by their Student Union. The Union gave them some funds under the supervision of an extracurricular student organization. The seed funding allowed the students to buy their first screen, along with an inexpensive computer built from commodity parts.

With their first screen online, the students were able to convince many other organizations and departments to fund Concerto displays in other high-traffic parts of campus. Screens were installed in many areas where people walk or stand in line, including dining halls, main thoroughfares, and the Bookstore. To these organizations, the benefits of connecting people with their messages and incorporating messages from other on-campus groups were numerous, and more than justified the costs of buying and installing the hardware. Here are a couple examples:

The Rensselaer Union funded the first screen in the network. With the help of the student founders, Union staff members created one feed for entertainment promotions, such as flyers for concerts, plays, movie nights, and dance recitals. Another feed was created for service and community, such as community service days, multicultural celebrations, and club meetings. Now, student club officers and staff members work together to moderate content that is sent to Concerto on the Web by other students.

Concerto is an essential advertising tool to promote events to the student body. With just a couple mouse clicks, a student user can get their message up on the Union’s own screen and others all around campus. They save paper and time, as there’s no longer much need to print out and tape up flyers all over campus. Plus, the Union ensures an end to clutter, since Concerto gives equal importance to every message displayed from the Club Events and Entertainment feeds.

Concerto has revolutionized campus communication. It is a unique, effective and elegantly simple way to easily personalize the publicizing of events throughout the campus.

Rick Hartt '70, Director of the Union

The Student Union granted $1500 to the student founders’ organization. This covered the purchase and installation of a 42-inch LCD TV and shoebox-sized computer to pump the visual display to the screen. The computer itself was just over $300 and entirely composed of commodity computer hardware from a common Internet vendor.

The Athletics Department saw potential in using Concerto for their events right from the beginning. These people, who promote sporting events to the entire campus and surrounding community, use Concerto to bolster their advertising efforts, announcing upcoming game schedules and special ticket promotions alike.

On the newly created Athletics feed, the Department makes available a large amount of sporting-related announcements. Department communications personnel simply turn some of the graphics from their sports flyers into digital announcements for Concerto, which they then upload directly from their computers. Since they already moderate the feed, it takes just minutes to get messages up on Concerto. And they also receive intramural athletics content from other staff and students, allowing them to be in constant contact with that other important component of RPI sports. 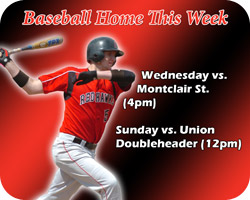 The Athletics Department will be christening a new athletics facility in October 2009. Concerto offers unique possibilities for connecting the new facility with the rest of campus, since it will also stream content from the campus that is unrelated to athletics information (but still important to the people who will be in the building). 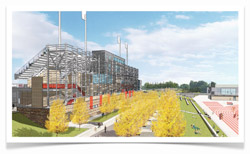 RPI’s Department of Public Safety cooperates with the school’s IT folks to inform the entire campus about issues of importance quickly.

Public Safety certainly uses email and conventional websites to keep people informed, but Concerto provides an immediate communications channel that students like to see as they walk to class and the dining halls. And since Concerto was initiated at RPI by a student group, there’s no “Ivory Tower” effect. The medium is governed jointly by students, staff, and faculty, and that kind of stewardship really resonates with everyone. Most importantly, Concerto has an emergency mode that allows the University to override all live content in the rare event of an emergency. Concerto pulls emergency notices from a secure website and accompanies the display with an audible alert. Emergency notices can be campus-wide or building-specific.


The Lally School of Management & Technology

The Lally School of Management & Technology acts just like a startup company; Lally staff and faculty want to maximize their reach by tapping into social media and popular networks. They run Concerto on two screens in the main lobby of their primary building on campus.

The Lally School was attracted to Concerto because of how the software can integrate them in with the existing campus culture. They’ve got a pulse on everything that’s being uploaded to Concerto from the Student Union, Athletics Department, and Career Center, and they also promote their own stuff to everyone else. Setting up their two screens for their specific audiences (i.e. management majors) is simple: a staff member just logs into the Concerto Panel at an easily accessible web address, clicks on a screen, then selects which content feeds to place on that screen. So they have the following feed subscriptions on the lobby screens: 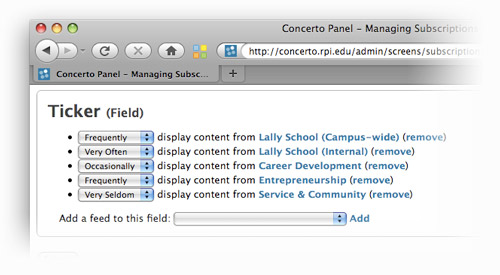 Reaching students on the Rensselaer campus can be a difficult task with the wide array of mediums used to draw the attention of the student population. With Concerto, we are able to reach our campus audience using multiple screens and direct our valuable resources more efficiently without so much footwork.


Concerto figures out all the details and creates a special mix of content just for that one screen. There’s no hassle, and the settings can be changed at any time. Oh, and the Lally screens showcase a layout and look that are uniquely designed just for the Lally School.

Concerto doesn't just stay locked up on those flat panel televisions, either. The Concerto Project offers a free, cross-platform screensaver that runs on people’s personal laptops and desktops. It streams live Concerto messages to a person’s computer whenever the computer is inactive for a couple minutes. So news is always on a screen somewhere in the background while RPI gets on with its daily life. The screensaver allows each user to pick out the types of feeds with which they’re most interested – maybe Athletics and Entertainment, or maybe Club Events and Career Workshops for the future movers and shakers of America.

Concerto is also fully compatible with the current generation of smartphones and mobile devices. While RPI's Concerto Panel is fully usable on most mobile platforms, developers at RPI have also begun to integrate Concerto with their development projects, such as iRPI, an app available on the iPhone App Store that provides news, an interactive campus map, and people directory.


We Don't Just Preach Openness. It's Something We Practice.

Concerto presents a flexible, powerful model for communication in the Internet age that encourages the growth of open networks. And right from the very beginning, the Concerto software has been available to the world for use at no cost. Concerto is released under the GNU Public License v2, which means that it is free software that may be redistributed and modified under the terms of the License. So RPI pays nothing for use of the code. Plus, students, staff, and faculty at RPI can help contribute to the future of the Concerto Project as developers. The same can be said for every person on the planet. Open source is a huge part of Concerto's bright future.

What impresses me most is that the whole codebase for the underlying system is open source. Concerto can be easily (and cheaply) adapted to other universities, colleges, high schools, elementary schools, and perhaps even cities. This is just the tip of the iceberg, and greater things are coming.

Thousands of Messages in Less Than a Year.

Concerto launched 14 months ago, and since then, well over 800 people with RPI web accounts have logged in and used Concerto to upload one or more ads. They can specify takedown dates automatically for each ad and design graphics for the network using common image editing software (or Powerpoint, which is also just fine). Concerto at RPI has hosted over 3,000 unique messages, giving the campus community a fresh dose of university and world news, promotions, and notices.